This case is one of at least five such lawsuits initiated by public agencies that are currently being litigated.  The five cases are summarized in this post.

This May, NJFOG shared a post by John Paff about a lawsuit filed by the Middlesex County Prosecutor’s Office for a protective order with regard to a request made under the state’s Open Public Records Act (OPRA). The case (Docket No MID-L-1217-15) is yet another “first strike” or “pre-emptive” action initiated by a public agency against a records requestor, who gets drawn into litigation he or she may never have intended to bring, and potentially at his/her own expense.

On June 10, a Middlesex County judge denied the Prosecutor’s request and issued an oral opinion that a records requestor has the exclusive right to bring suit under OPRA. NJFOG obtained the hearing transcript, available HERE, which includes multiple cases heard for which the Prosecutor is a party. The court’s opinion on the protective order with respect to Docket No. MID-L-1217-15 appears on pages 64-65 of the transcript as follows: 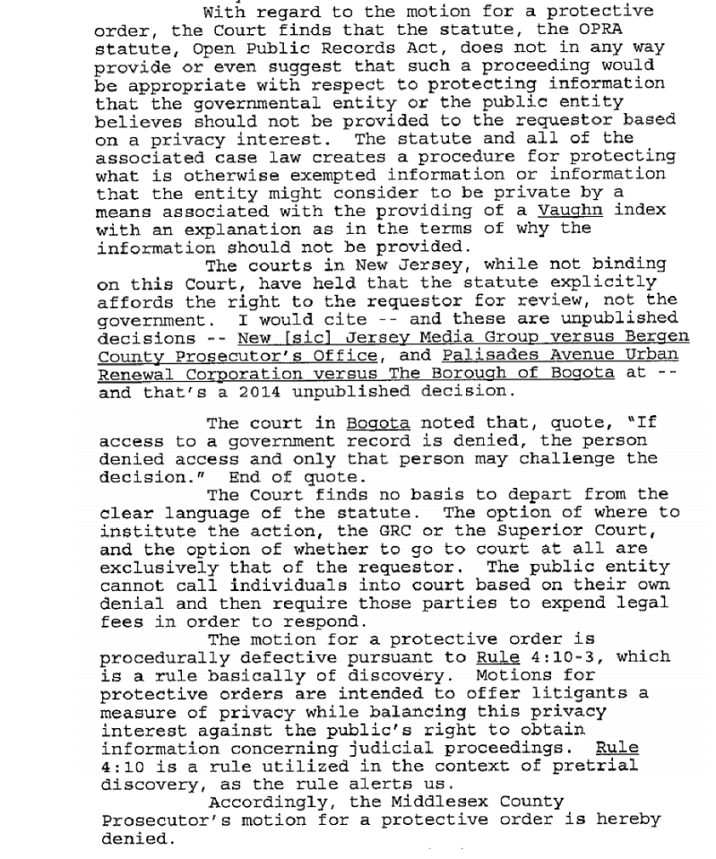 Judges frequently issue their opinions verbally rather than in writing. While a written decision is generally given more weight than an oral decision, the results are the same: the Court agreed that public agencies do not have the right to file OPRA lawsuits against requestors. A written opinion was issued just this past week by a judge in Atlantic County who also ruled that public agencies can’t bring suit under OPRA.

These two cases are two of five lawsuits initiated by public agencies that are currently being litigated that we’re aware of. Here’s the status of the other three:

The oldest case is the Carter case. We expect that the Court in that case will issue a decision that definitively says whether public agencies may file these types of lawsuits. (Please note: NJFOG’s president represented Mr. Carter when that case was pending in the trial court and currently represents the defendant in the Tabernacle Fire Company #1 case).

We expect that the Middlesex and Atlantic County decisions are harbingers of a good decision from the Appellate Division.