NJFOG is a bit behind on posting this story, which was reported in mid-April. It is worth reading. Kudos to South Orange Village President Alex Torpey for his efforts to promote open, transparent, accountable government. – NJFOG 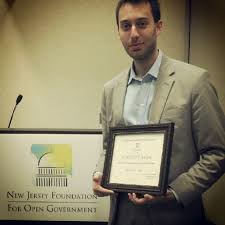 The Village Green of Maplewood and South Orange
April 15, 2015
By Carolyn Maynard-Parisi

(Full article here and posted below.)

After a lengthy and occasionally testy debate, the South Orange Board of Trustees unanimously agreed to strike down an ordinance championed by Village President Alex Torpey intended to codify greater transparency between government officials and the public.

The ordinance, #2015-06, would “require that government records and information be made available in transparent and accessible formats, and [set] other open government and privacy provisions.”

The video of the meeting can be viewed on the Village website.

Among other provisions, it would charge township officials and employees with creating and maintaining (within two years of adoption) a machine-readable index of all South Orange government records; posting all public records including agendas, minutes, resolutions, ordinances, proclamations etc. within one week of them becoming public; posting and maintaining a publicly available index of all Open Public Records Act (OPRA) requests, and responding within seven days to any public comments made during public township meetings.

Trustee Deborah Davis Ford said the legal and personnel committee, which she chairs, had agreed that while the goals of the ordinance were admirable, the township already does most of what it would require.

“We’re very, very responsive,” said Davis Ford. “Our clerk and deputy clerk are exceptional” in responding to the public. Further, the ordinance would be “arduous” for the township staff to carry out, and some of its provisions were unclear. “It’s not ready,” she said.

“What we have is the cart before the horse,” said Trustee Howard Levison, who is also on the legal and personnel committee. Levison later explained in an email that he was concerned that the township did not have the systems in place to follow the ordinance’s objectives. “I go further than the other Trustees where I would require the policies as prerequisites to any implementation so as to understand the various interrelationships and costs.”

All six trustees questioned the wisdom of enacting an ordinance without having more specifics, and wondered about the burden it would place on already time-strapped township staff.

“Policy statements are more typically adopted via resolution rather than ordinance,” said Township Attorney Steve Rother. “Ordinance carries with it the immutable force of law going forward.” In addition, by requiring that OPRA requests be indexed, the ordinance would have the effect of creating new government records.

Trustee Walter Clarke expressed concern about the ordinance’s provision that the township create and index all government records within two years.

“There would be a considerable amount of extra work,” said Rother.

Torpey said no policies currently exist in South Orange regarding the release of information to the public. “We should be held that accountable.” He continued, “Government transparency is not a choice. The public has a right to have the information in a…format that allows people to use it.”

Torpey pointed out that he had already taken many steps toward increasing transparency in South Orange, and that he could have instead issued an executive order to enact the policies rather than bringing the ordinance to the BOT for a vote.

Trustee Sheena Collum said that increasing transparency was an ongoing process that had begun with previous administrations and Village Presidents. “The issue [here] is the mechanism,” she said. She noted that ordinances are very serious and carry with them financial penalties, and she would prefer to have a resolution adopting a policy.

Only an ordinance would have the teeth to hold officials externally and legally accountable, said Torpey. “Third parties can sue you to enforce it,” Rother cautioned.

As the debate went on for nearly an hour, Torpey ticked off a list of cities and municipalities that have adopted similar open government ordinances, including New York City, San Francisco and Salt Lake City.

“Those cities are massive, Alex, their budgets are huge,” said Collum, her voice rising. “Show me someone that has a community like ours…with our limited bandwidth…that can pass this kind of ordinance,” said Collum.

“I know how thin we’re stretched…you don’t have to explain it to me,” said Torpey, growing visibly irritated.

Trustee Marc Rosner began to speak, but Torpey interrupted him. “What I will not allow is for people to be confused by aspects of this [ordinance],” said Torpey.

The trustees then took a straw poll on whether to pursue the ordinance as written; all six voted no. They then voted 6-0 to strike the ordinance.

Torpey asked the legal committee to rewrite the ordinance into a resolution. Levison also asked that the township move forward with implementing operating procedures to make it easier to carry out the policies.

“I would like to see you, Trustee Levison, not pick out [any] one ordinance…but to put a project plan in place” for all action items, said Torpey.

“I have been saying [that] for four years,” said Levison.

In an email to The Village Green, Torpey called the board’s decision “disappointing” and said it goes against agreed-upon best practices widely advocated by open government experts.

“…a resolution would just be internally accountable, i.e. the town would be in charge of policing itself rather than the legal system. It’s certainly not as big of a step forward as we should have taken, but it’s no doubt a (small) step in the right direction.”